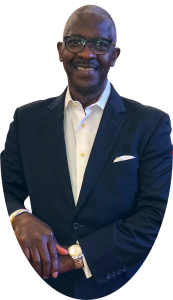 Verlin Darek Williams is a native of Detroit, Michigan; the first of eight siblings born to James and Julia Williams. At an early age, he learned the value of family and was nurtured by the family Bible studies that took place every Friday night in his home. He was reared in Jefferies Homes and educated in the Detroit public schools. Verlin was graduated from Murray Wright High School in1972.  In 1983 he was graduated from Wayne State University having earned a Bachelor of General Studies Degree.  In the fall of 1983, he relocated to Lombard, Illinois, and enrolled at Northern Baptist Theological Seminary. Verlin completed his studies and earned the Master of Arts in Theological Studies with specialization in Pastor Care and Counseling in 1986.

Dr. Williams’ pastoral ministry began in 1986 in Richmond, Virginia where he was called to the New Light Baptist Church in the Church Hill section of the city. While providing preaching, teaching and pastoral care Dr. Williams led the small congregation into a major building renovation project. The renovation of the historic landmark building was celebrated by the New Light church family and the City of Richmond.

In August 1993 Pastor Williams was accepted into the Doctor of Ministry Program at The School of Theology at Virginia Union University.  In March of 1994, Dr. Williams received the call to the pastorate at Union Baptist Church in Greenburgh, New York. He arrived to take charge of the pulpit in June 1994 with his five-year-old daughter Candacee and wife Dorothy.  In September 1994 Pastor Williams was installed.  Pastor Williams graduated from The School of Theology in May 1996 having earned the Doctor of Ministry Degree.

Dr. Williams understands his call to the local congregation and has committed his life to the church. Upon arrival at Union, he rolled up his sleeves and went to work. Over the years he has offered multiple weekly Bible studies. His expository preaching style has resulted in spiritual growth among the membership. Over the past 25 years, he has seen several hundred conversions and baptisms.

In addition to membership growth, in September of 1997, the Union Baptist Church paid off its mortgage and began a building fund for the construction of a new church complex. After ten years of praying and planning the church broke ground to begin construction. In September 2009 the church family moved into the newly constructed UBC Worship Center.

Under Dr. Williams’ leadership, the church has adopted the following core values: Spirit-filled worship, making and developing disciples, developing leaders, and enhancing the lives of the people who live in the Fairview Greenburgh Community. Besides community projects, the ministries of the church continue to be expanded. As a cornerstone activity, since 2012 the church has become a leading food distribution center in Greenburgh through its Food Service Ministry.

While he focuses on developing the ministry of Union Baptist Church, Dr. Williams’ doors are always open to community leaders and local politicians. He believes that, for the church to stay relevant, it must prioritize the Biblical mandate to preach the gospel of Jesus Christ and to participate in the lives of people. We are "The church in the heart of the community with the people of the community in its heart", working to fulfill the Great Commission, “Go therefore and teach all nations, baptizing them in the name of the Father, and of the Son, and of the HolyGhost."

Thank you for subscribing!

Something went wrong. Please check your entries and try again.